There are countless benefits to ceiling fans. By taking advantage of the body’s natural cooling systems, ceiling fans are able to lower the perceived temperature of a space by more than four degrees, which saves thousands of dollars on energy bills during hot summers. What’s more, ceiling fans can be reversed during cool seasons to keep areas warmer and more comfortable, also reducing energy expenditure. 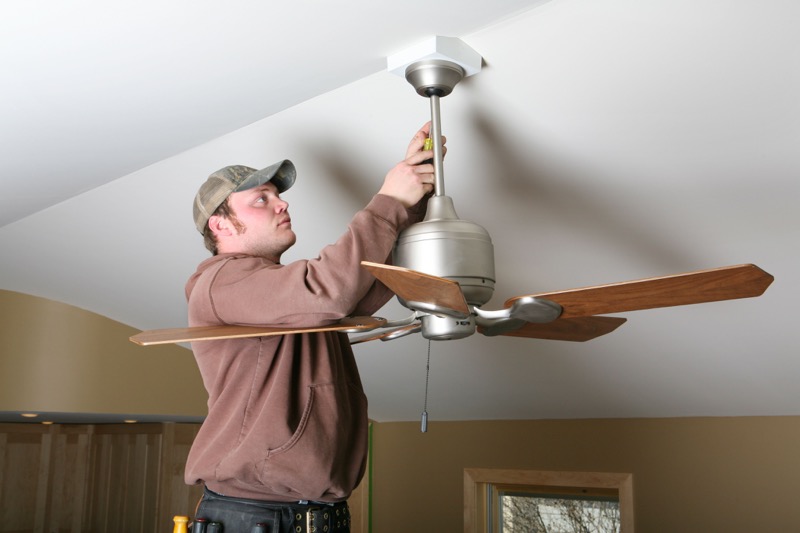 If you are interested in installing ceiling fans around your interior and exterior spaces, here are a few rules to ensure that your ceiling fans look and function as perfectly as possible:

Almost anyone can replace old ceiling fans with new ceiling fans; the process is as simple as changing a light fixture, though you might need some help holding the heavy fan motor while you attach the wires hanging from the ceiling box.
However, installing a new ceiling fan in a space that has never had a ceiling fan before is a much more difficult task. Not only will you need to run wires to the location in the ceiling where you will hang the fan, but you will need to install a box that is properly braced to support the fan’s weight. Unless you are incredibly experienced with electrical and structural work, this job is best outsourced to a qualified professional.

Rule 3: Position the Fan Correctly in the Space

Size is not the only important consideration for ensuring that your ceiling fan looks good and functions properly. You also need to place your fan well in the room, so that it can draw and push air into the right areas for better temperature control. Most experts advise keeping ceiling fans as close to the center of a space as possible, and if you have multiple fans in the same room, you should try to align them along the long axis. If you do opt to place a fan off-center, you must keep at least 18 inches between the edge of the fan’s blades and the nearest wall, to allow air to flow up and around the fan as it should.

Ceiling fans are not known for being the most stylish appliance in the home — which is a shame considering the wide variety of styles available. No longer do you need to resign yourself to the same boring ceiling fan model; you can find ceiling fans that fit every interior design style, from incredibly modern to rustic farmhouse and everything in between.
As you are shopping for the exact right fan, you should think critically about whether you want your fixture to have lights. Some ceiling fans have optional light kits that you can install after the fan is hanging, but many of the more unique ceiling fan styles do not. Thus, if you want to give your rooms an overhead lighting option via your ceiling fan, you might need to limit your search to fan styles that include light kits.

Rule 5: Invest in a Reputable Brand

Not all ceiling fans are created equal. Different brands prioritize different aspects of ceiling fans in manufacturing to create vastly different end products. Some fan brands are highly regarded for their precision motors that operate smoothly and quietly; other brands are known for their rock-bottom prices. As you are shopping for your new ceiling fan, you should consider what attributes of the fan matter most to you now and what will matter going forward. Likely, you want a fan that looks beautiful and runs easily with minimal maintenance and will do so for many years to come. You can research the reputations of different ceiling fan brands online by reading reviews of their products.

Installing a new ceiling fan in your home can radically reduce your energy expenditure year-round. By carefully choosing a fan that suits your interior style, you can enjoy the look and function of your new ceiling fan into the future.