How the Modern Showers Evolved?

Humanity has only recently started taking hygiene very seriously. Our earliest ancestors didn’t care much about personal care, or perhaps, to put it better, they didn’t have the time. We were nomads. Hunters and gatherers, uniquely gifted with just one thing by evolution, our cerebral cortex in our brains, the biggest of all animals. It is amusing to realise the fact that not too long ago, bathing was not unanimously agreed upon in medieval times. Some even considered it a sin. Bathing, an activity considered laborious by many in earlier times, has now become synonymous with the phrase, ‘take a shower.’ Even the modern opinion on bathing is divided. It is almost ubiquitously agreed that bathing once a day is optimal for our health. But in recent times, research has pointed towards a reduced frequency of baths. Somewhere around 3-4 times a week. Since the last century, bathing has turned into something quick and efficient. An activity that is over in minutes if not seconds. Let’s take a deeper look down the road we took to reach the modern showers and bath facilities like the best high pressure shower heads or the most luxurious home spas.

How the Modern Showers Evolved?

Oftentimes our parents would tell us to not get wet in the rain. But rain, was a common way to shower in our early caveman days. Numerous depictions in ancient art has made historians believe that waterfall and rain, were as close to shower as one could get in ancient times. It is quite possible to imagine how early men and women, might get under the base of a waterfall, and enjoy those heavy downpours upon them. 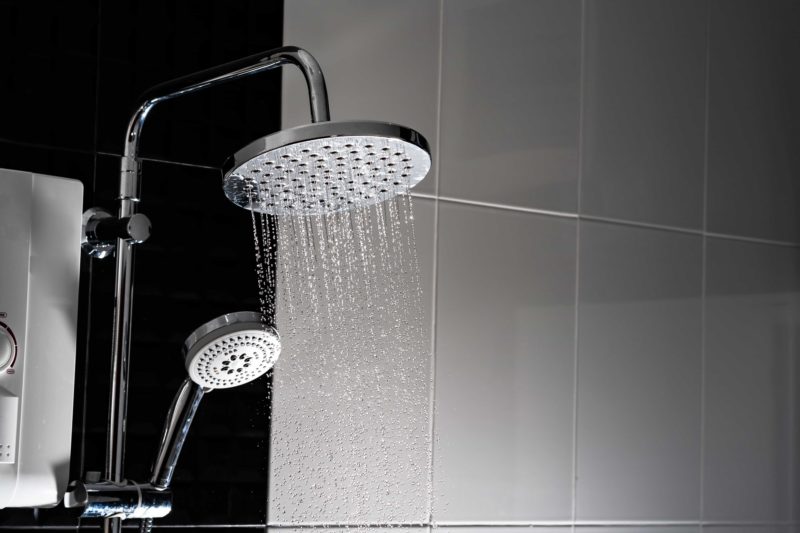 Egypt has been the cradle of many modern practices. One such is the carrying of water across the city in long tunnels and systems known as aqueducts. As these were mostly for irrigation purposes, the Egyptians thought of the idea of carrying water into the luxury of their homes in a bucket, for a great bath. It may now seem something quite obvious, but back then portable water for bathing was considered revolutionary. What’s interesting, however, is the fact that many Egyptian overlords wouldn’t indulge in taking a bath on their own. They would rather have their slaves pour cold water over them in their private chambers.

Greeks to the rescue

Greece not only gave the world democracy, but also invented the world’s first aqueducts and sewages. The Greeks had built a series of channels, similar to Egyptians, but different in one aspect. These channels were twin channels. They carried fresh water in and waste water out of the city. Installed extravagantly for the high ranking people of Greece, and then later for the common folks, were the communal baths and shower rooms. Even the water spouts on the fountains outside were used for bathing and cleaning sometimes. And then the Romans created their famous great bath houses in ancient Rome. These were specifically designed keeping gender in mind, separate for men and women.

It does sound interesting that a religion would consider bathing, a sin. But it is true for the medieval Europe. Good hygiene and bathing was considered a sign of vanity among European Christians. It was only after the death of almost a third of Europe from the infamous Black Death, that people started taking hygiene seriously. Finally, cleanliness increased in popularity and people became more health conscious after noticing the benefits of bathing.

As humanity progressed, it was in the year 1767, that the first shower patent was granted to William Feetham. Feetham was a stove maker who somehow managed to earn his daily bread. But soon after his design revolution swept the London streets, more and more people were installing the hand shower designed by him.

He employed a simple but versatile design.

The shower was based on a hand based pump which was extremely portable and also light. The servants didn’t have a hard time transporting the water for their masters and lords. 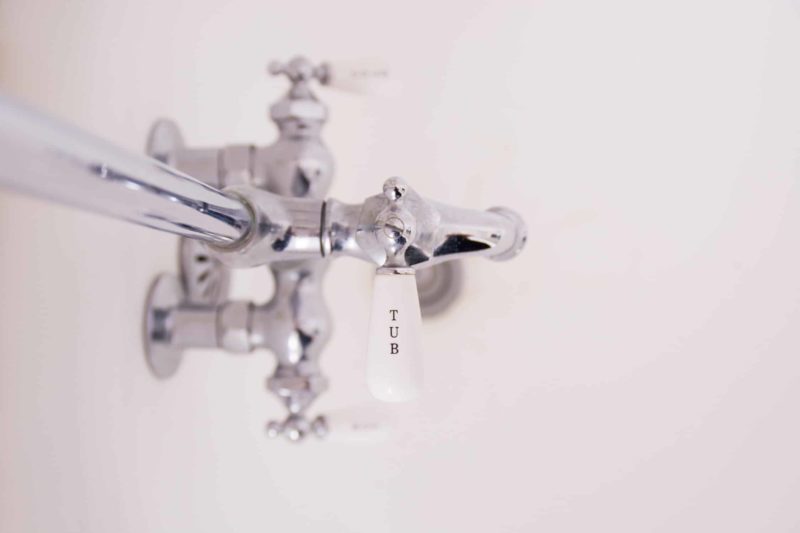 Feetham’s design had one major flaw. It was quite large and bothersome. Standing tall at a hefty 10 feet, the metal pipes for water circulation were made of iron alloys. This also made rust a problem for regular users. Feetham’s design failed to garner any traction with the rich, and the erudite class alike. None of them liked the fact that hot water couldn’t be pumped through it. Also, feetham’s design was recycling the water repeatedly. After a shower or two, the water would get dirty and smell.Soon after, the design of English Regency of circa 1810, improved upon the existing model by adding basins atop the structure, to assist in pouring water over. This improvement too was limited in one aspect, no fresh water was made available. The water was collected from the bathing tray and pumped back into the system. It was only in the 1850, that with the advent of modern plumbing, standing water showers were made available. They had the biggest advantage in offering fresh water for every bath, when connected to a renewable supply.

Under the guidance of a French doctor, Francois Merry Delabost, the communal showers resembling the modern design, were installed back in 1870s, as a measure to check wastage and promote hygiene. He showed that installing common showers with fresh supply was not only economical in public institutions like prison and military, but this also maintained the hygiene. Soon after the initial experimentation, first shower in a public bath place was installed in Vienna, Austria in 1887. Similarly in France, public shower houses were installed by Charles Cazalet in 1893 and 1899 at Bordeaux and Paris respectively. 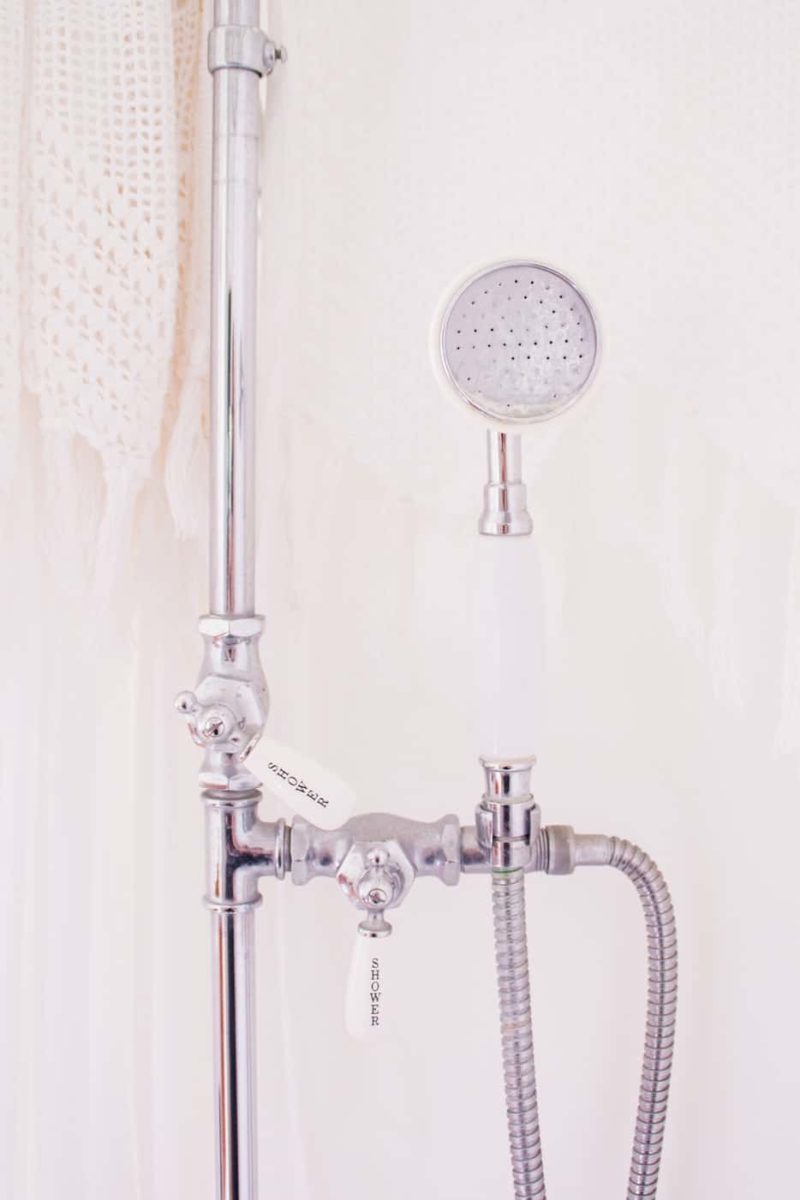 Not only are there water showers today, but various kinds of showers also exist. In a 1907 catalogue of various plumbing fixtures, from JL Mott of New York, there are found several turn-of-the-century features which resemble many of modern bathrooms with a vintage feel. The catalogue had several types of shower heads. Interestingly, they all had circular face with numerous holes riddling them, and a common nozzle to feed the water in.

If say, you increase the pressure, the velocity of the flow will drop, or if the pressure is reduced, velocity manages an easy jump. This is exactly the principle employed in the design of high pressure shower heads. The holes are kept at a certain number to ensure that not much pressure is lost in the delivery process. The velocity, in this way, stays at a moderate rate. Neither slow, nor uncomfortably fast.

The Intervention of the US government

Till the 90s, the designers were free to design the shower heads as they please. There were no guidelines to follow or stringent laws to adhere to. But that changed soon after the Congress established the Energy Policy Act in 1992. Not only this, but several states, on their own, started reshaping and adjusting the Energy Policy Act. It was so because the states had varying amount of water resources available.And given their circumstances, states were free to choose the magical number of gallons per minute that a shower could throw.

It was set at a modest 2.5 GPM at 80 PSI. All were not happy with these numbers, however.  It was found that this volume of water didn’t supply enough water pressure to effectively rinse off shampoo and soap residue.

And ever since the drought has become more prevalent across the country, several states have tightened their grip on the shower heads. Some even squeezing hard enough to enable only a meagre 1 GPM to pour out. These new models save water and do so very effectively. This has, however, resulted in dissatisfaction among users. Because of the new rules, the manufacturers are forced to lessen the hole diameter even more.

Even though this increases the pressure, but the volume is too low even at such pressures, to give an overall effective cleaning.

Very recently, the maker of bathroom accessories, High Sierra, has invented a model that doesn’t employ smaller holes or air for effective delivery of water, but it rather uses an ultra low flow shower head to do the job. This, according to the patent, produces the same effect as a 2.5 GPM unit even at 1.5 GPM of water volume.

The modern showers that we enjoy today have been through a lot. A lot of design tweaks and changes over the decades. How unassumingly they stand in our bathroom, efficient and quick at their job. Perhaps ancient men would call us gods for mimicking the rain itself.

Who knows what’s in store next. If you ask me, I would like a thunder shower; something that produces a thunderous sound similar to a thunderstorm while the water flows.

A man can wish!